The Advisory Council of UNIR Peru debates the challenges of the 21st century university: “you have to reinvent yourself”

Personalities from the academic, social, business, and communication field of the transandean country participated in a seminar moderated by Rafael Puyol, President of this institution.

“The Peruvian university system needs a reinvention and a paradigm shift.” This was one of the main conclusions reached by the members of the UNIR Advisory Council in Peru, who discussed the challenges and opportunities of the South American country in the 21st century at the end of October. The venue chosen for this meeting was the Madrid headquarters of the Proeduca Group and everyone agreed on the importance of transformation in the educational world, a conclusion within the academic reflection seminar moderated by the UNIR president, Rafael Puyol, who welcomed the councilors on their visit to Spain.

Among the guests were prominent personalities from the academic, social, business, and communication fields of Peru. Hugo Díaz Díaz, who was president of the National Education Council of this country between 2014 and 2017; Efraín Gonzales de Olarte, rector of the Pontifical Catholic University of Peru (PUCP) and main professor in the Department of Economics of that institution; Mario Ghibellini, journalist and editor of the Peruvian newspaper El Comercio; Santiago Cueto, executive director of the Development Analysis Group (GRADE); Lea Sulmont, academic vice-rector of the Private Peruvian German University; and Ricardo Vega Llona, businessman, former Peruvian senator, and former president of the business entities ADEX and CONFIEP.

The cycle (broadcast live, via streaming for all of Ibero-America) served to reflect various views on the Peruvian reality and perspectives from the fields of education, civil society, business, and communication.

“Education transmits values for the common good of citizens”

Introducing the debate, Rafael Puyol gave the floor to Eduardo Pérez del Solar, Chief Minister of the Chancellery of the Embassy of Peru in Madrid, who transmitted three messages from his diplomatic headquarters. The first of which highlighted the importance of Peru’s relationship with Spain, which “we must take care of in all areas. UNIR makes it possible to strengthen Peru’s unbreakable ties that bind us to Spain.”

The second message was that “education transmits values for the common good of citizens.” In this context, he pointed out that “technological tools are key. The pandemic has revolutionized the use of these tools.” And in the third, Del Solar wanted to convey that Peru’s challenges are enormous: “The opportunities are within reach. Education is key as an area in which to collaborate for the progress of the country.”

Immediately afterwards, Mariano Jabonero, Secretary General of the OEI, transmitted a video message to the attendees. “The OEI has a long history in Peru. We opened our office in that country several decades ago. It is a nation with a complex, rich, and highly varied history. UNIR’s initiative has our full support, for those who organize it and for the country that is the focus of the event.”

Training in key profiles is a priority

Subsequently, Rafael Puyol opened the debate with Efraín Gonzales del Olarte, asking if Peruvian universities are really training the professional profiles that the market demands, and if they contribute to reducing the country’s social gaps.

Efraín responded that “in order to understand the role of Peruvian universities and what kind of professionals they are training, it is important to know where we come from. The Peruvian economy has grown up until 2019. However, the pandemic has shown that growth was uneven. The Peruvian economy is lacking engines. Expert professional profiles should emerge in manufacturing for export, in computer services, and in other branches for which new training is required in the universities.”

Later, he described the university scenario in the country: there are 94 licensed universities, one and a half million students, and 74,000 university professors. Only 104,000 students are pursuing postgraduate degrees. “We are lacking skills in master’s degrees. The problem is that university quality is heterogeneous, and the offer is insufficient. There is a structural deficit. In addition, we have poorly trained teachers. 405,000 students have dropped out of college due to the pandemic, which has forced universities to go digital. There is a new university paradigm. We will need another type of university and professors”, he stressed.

The overwhelming need for digitalization

After his intervention, Rafael Puyol gave the floor to Hugo Díaz so that he could explain the great challenges of Peruvian universities. “If the university does not reinvent itself and digitize, the same thing will happen to thousands of companies: they will disappear, because there are already other types of more attractive offers. Universities must be managed in other ways, thinking that they are acting in a global world. UNIR has these characteristics, but it would be very important that other Peruvian centers also have them. The problem is that they are still immersed in a very short-term plan. They must think in the medium-term”, he emphasized. 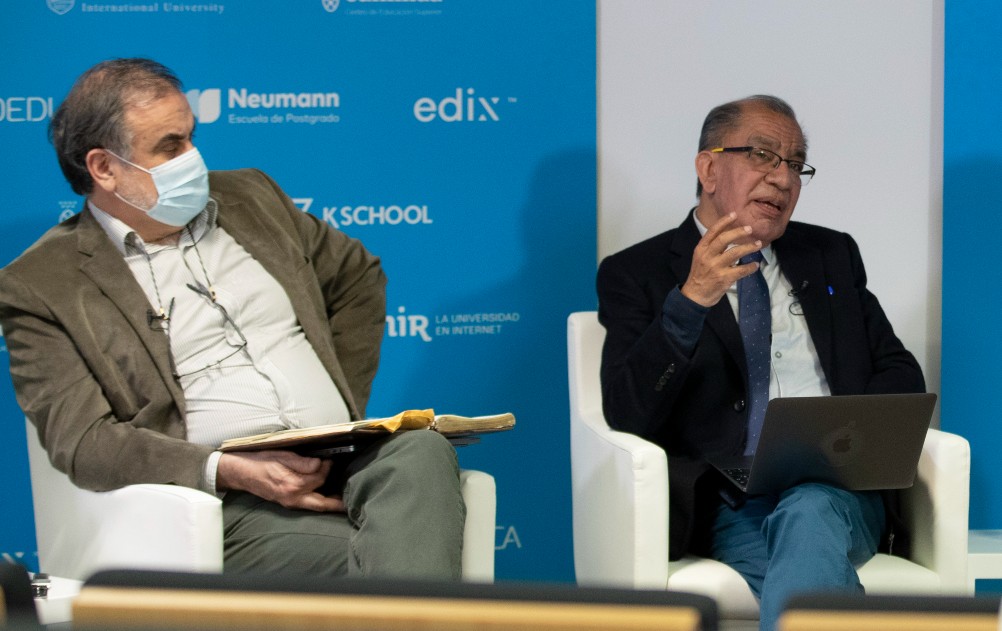 The second challenge highlighted by Hugo was quality improvement: “An OECD study in Peru in 2018 concluded that there is a low level of basic skills among university adults. Technologies have to play an important role in this regard”, he said. For him, the third great challenge is that of financing: “Very hard economic times are coming in Peru. Budgets for universities depend on income. As there will not be enough income, universities will have to be much more creative to sustain themselves and they will have to be more efficient in their expenses.”

“A tremendously inequitable educational system, which needs to be corrected”

Santiago Cueto then spoke and delved into the specific aspect of the digitization of Peruvian universities: “73% of Peruvian urban schools have internet access, but in rural schools that percentage is 12%. Poverty is higher in rural areas. Then the gap widens. The Peruvian educational system is tremendously inequitable”, he assured before adding: “In Peru we have had two decades of digital programs run by the state that have not been very successful. Part of the failure is explained by the fact that there is a lack of continuity and investments of millions are lost.”

In his opinion, “digital inequity occurs not only in access to poverty and rurality, but also because of not knowing how to use digital resources. This also creates inequity. But, despite the fact that the Peruvian educational system is unfair, at least some positive changes are observed. The government designed a program called ‘I learn at home’. Even with all the limitations, it has distributed a million tablets among the poorest population, for basic education students. This is a start.” On the other hand, he recalled that “in the midst of the pandemic, Congress approved a reform of the Constitution that guarantees internet access to the rural sector. Now it will depend on how that measure is applied in a practical way.”

“We must professionalize teachers”

For her part, Lea Sulmont tried to describe what the emergency x-ray of Peruvian university teachers would be like today. “The Peruvian professor is tired and exhausted, after two years of the pandemic and with the need to perform their functions in a context for which they were not prepared. And yet, they have maintained the educational community. On the other hand, it is necessary to professionalize the university teacher in Peru and this implies developing competencies and skills and acquiring knowledge.”

Finally, Ricardo Vega Llona referred to the relationship between the university and business worlds in Peru. “A greater effort must be made to join academics with business. There is a glimpse of a small gap that needs to be resolved. On the other hand, the market and the companies in Peru need engineers. The agro-export phenomenon in our country requires more specialized technologies and professionals who are trained in them: from the management of water, seeds, and productivity capacity.”

In conclusion, Rafael Puyol wanted to synthesize some of the ideas of the speakers: “There is a certain similarity in the Peruvian university scene with what we have seen in Spain. The Peruvian university needs reinvention and a new paradigm. Digitization still has shortcomings, but the challenge is great and exciting, since the universities of any country, and in this specific case in Peru, must be the engines of economic and social progress.” 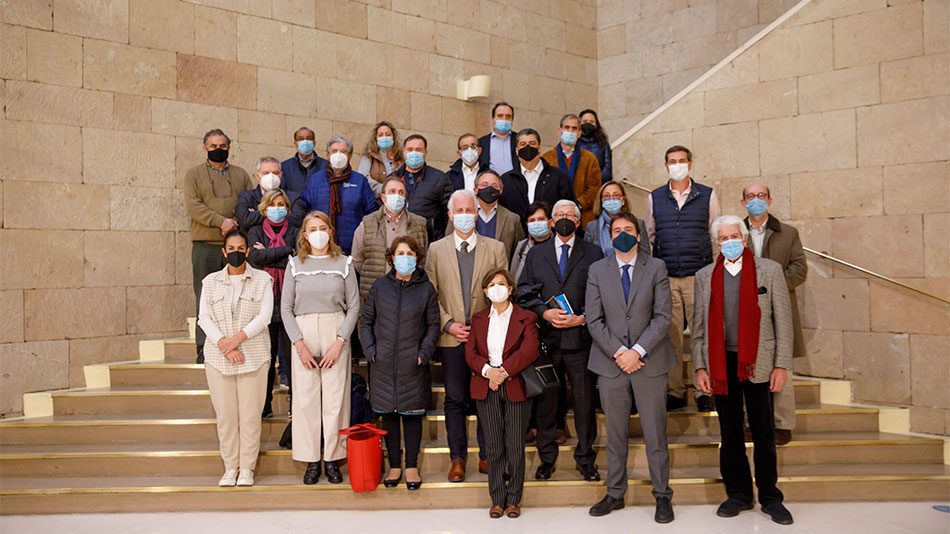 The members of the UNIR Advisory Council in Peru continued their visit to Spain in Logroño, where they toured the the central headquarters of the city, as well as the town hall, where they took advantage to talk with the mayor, Pablo Hermoso de Mendoza.