The International University of La Rioja has obtained first place in education nationally, according the U-Ranking of Spanish Universities that the BBVA Foundation and Ivie release every year.

The International University of La Rioja has obtained first place in education nationally, along with seven other universities, according the U-Ranking of Spanish Universities that the BBVA Foundation and the Valencian Institute of Economic Research (Ivie) release every year.

The recently published report analyzes the performance of 70 public and private universities that have managed to classify for the U-Ranking out of the 84 schools that are currently in Spain. The universities were evaluated on three main missions: education, research, and innovation. 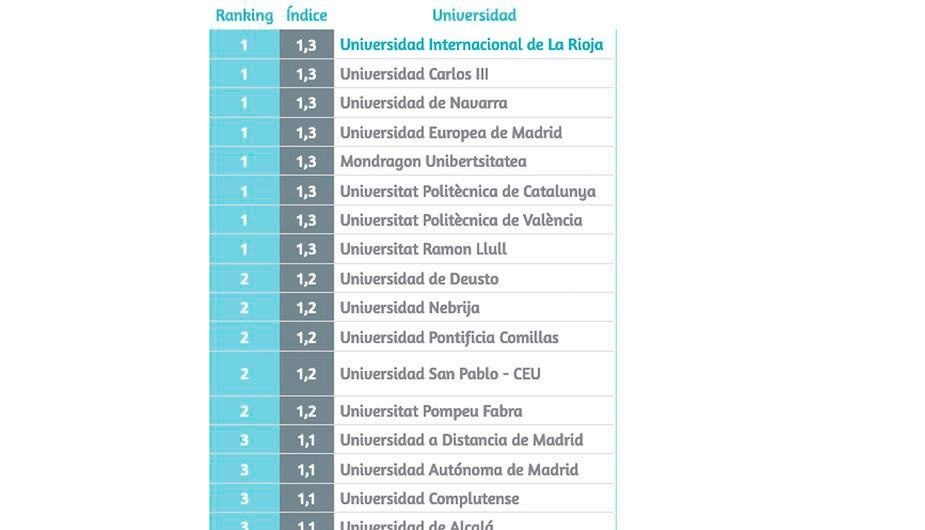 In addition, the study contains an analysis of the job placement rate of each university. The International University of La Rioja also achieves a prominent position in this regard, since it occupies the third place in the ranking of job placement of students. In particular, it highlights the placement of graduate students in the branch of Social and Legal Sciences.

For Juan José Sobrino, Director of International Programs and Rankings in the Quality Department of UNIR, “the results obtained have to be accepted, given their validity and representation, because in the case of UNIR, approximately 1,800 graduates are being considered and the ‘University Statistics’ of the Ministry of Universities and Social Security affiliations are being used as sources”.

Sobrino also stresses how important it is for a university to qualify in this ranking that provides so much information, on at least 18 indicators, in different public information systems and does so with transparency.

This highlights that most Spanish universities are increasingly contributing and striving to provide more public information, complying with the principle of transparency agreed upon within the European Higher Education Area (EEES) and thus facilitating students and their families to make the best decision regarding their future at university.