The successful ceremony congregated more than 3,600 people, eager to witness the proof that effort has its reward and that dreams can come true.

The second largest city in Ecuador and the UNIR family became even bigger yesterday, and you could sense the warm and welcoming feeling that characterizes Guayaquil firsthand, thanks to it being a port city. This intense welcome continued into the Guayaquil Simón Bolívar convention center, headquarters of the first UNIR Alumni Celebration. The successful ceremony brought together more than 3,600 people, eager to witness the proof that effort has its reward and that dreams can also fulfilled.

The large and dedicated public was mainly composed of family, friends, and teachers. Together with them were the real protagonists of the day: the 934 students that traveled to attend the celebration (although there are almost 2,000 Ecuadorian students who graduated on this occasion). Among the attendees, there was a wide representation of the various provinces of Ecuador. Loja or Chimborazo to Pichincha passing through Cuenca, Manabí, Esmeralda, Azuay, Santa Elena or El Oro, among others, made their presence felt. There were even some attendees that had traveled from Chile and Italy for the occasion.

The intensity of the moment was also felt during the speech made by the Chancellor of UNIR, José María Vázquez García-Peñuela, in which he conveyed his sincere congratulations “to all of you who have graduated, and for what it means to have this recognition of the effort you made to complete this important academic achievement in your professional and personal life”. A merit that, he wished, “is not only a lever to improve your working and family conditions, but also an instrument to better serve your communities”. 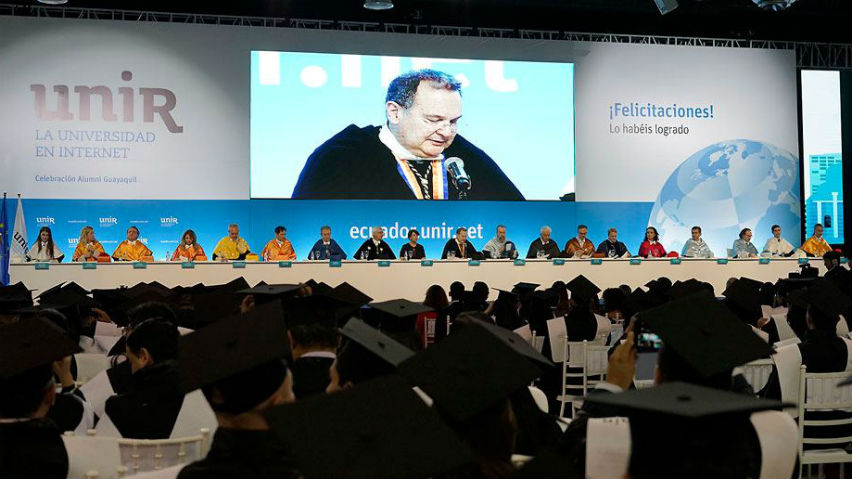 A clear vocation of service to others, without which, he stressed, “we will never be good professionals or good citizens.” After delving into the current prevailing mentality about “how quickly we demand what we consider our rights on bases that are not always clear or reasonable”, especially the right to happiness. The Chancellor of UNIR said that such happiness “is something provisional and contingent, when we have it, is given to us, it is not the result of a demand on our part”.

“He who seeks his own happiness at all costs ends up being a sad, unhappy one. On the contrary, it is often found by those who seek to make others happy,” he continued. That is why he revealed that the best way to make a better world, “one that we all have within our reach, is something as simple, and as costly, as being people who perform their own duties well. It is a duty to our fellow humans: The street sweeper who does his job well helps others to have a better environment, the teacher who prepares his classes well makes it possible to train his students… Fulfilling our obligations well is the best thing we can do for everyone else,” he concluded.

A message that was the underlying one of the master class taught by Vice Chancellor for Innovation and Educational Development of UNIR, Javier Tourón. Under the title ‘Education and Freedom: The Greatness of the Small’, Tourón covered aspects such as intelligence, tending to the truth, and good will. These issues—truth and good—which are essential references in education, are “synonymous with growing as a person”. An objective in which, he said, those present must “help others, so that they travel their own path without you losing yours.”

“You are educated by what you are more than by what you say, that is why we have to be people of integrity who try to promote in others the same values that they are trying to conquer in their own lives. Their greatness as people will depend on the perfection with which they do their work, on the attention to minor details,” he said, in clear reference to the ‘greatness of the small’.

However, he also invited graduates to take work “as something very great, the stuff of their own personal perfection if they perform it with transcendence. Work is an opportunity to serve others, to be freer, because to work well, it is essential to be willing to put ourselves forward with the best we have”. With these ideas in mind, Tourón encouraged the new graduates that their professional and personal plan “should lead them to be what they should be: good people, good professionals, good friends, and good citizens. Qualities that are achieved day by day, with effort and sportsmanship. They are made up of small things, but both are great things”. 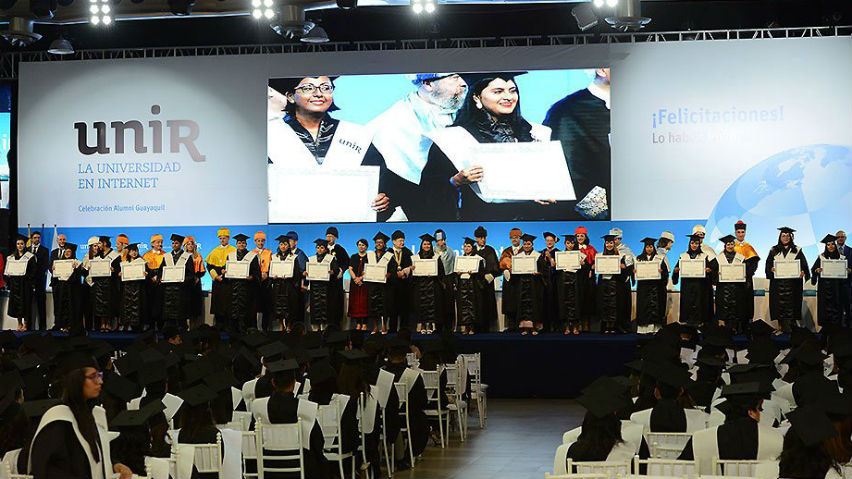 A message endorsed by Viviana Margarita Veliz Acosta, a graduate of the Master’s in Language and Literature Teaching in Secondary Education, noting that “in every human being there is a desire to offer the best of ourselves”. On behalf of her classmates, the student emphasized that UNIR was “the one that gave us the opportunity to grow, empower ourselves, and demonstrate that we were able to achieve excellence through studying online.” 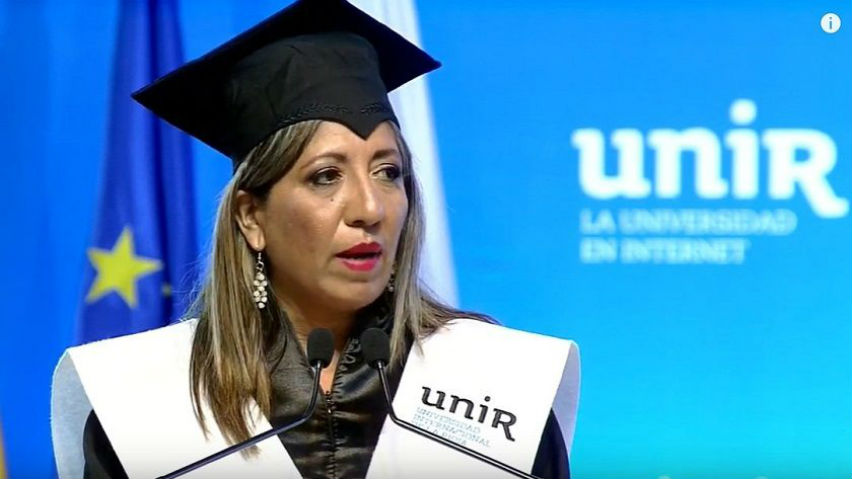 Family, friends, and bosses were present in the appreciation, also the teachers of UNIR and, especially, the tutors of the university, whom she described as “extraordinary human beings who, despite the time change, were always on top of things; their words of encouragement were the fuel to move forward and not fail”. 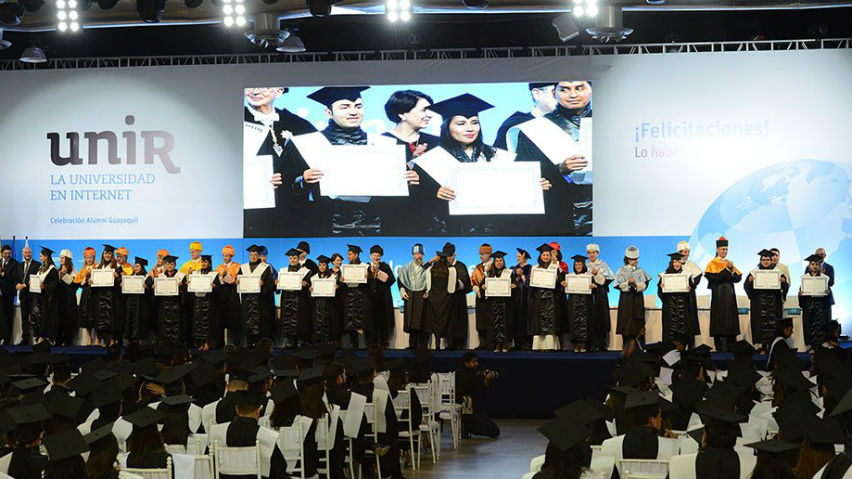 Her speech, received with a standing ovation, concluded with a message to future generations: “The potential growth of a country lies in the continuing education, learning, and desire to excel of each professional. It makes us grow as human beings and as a society.” 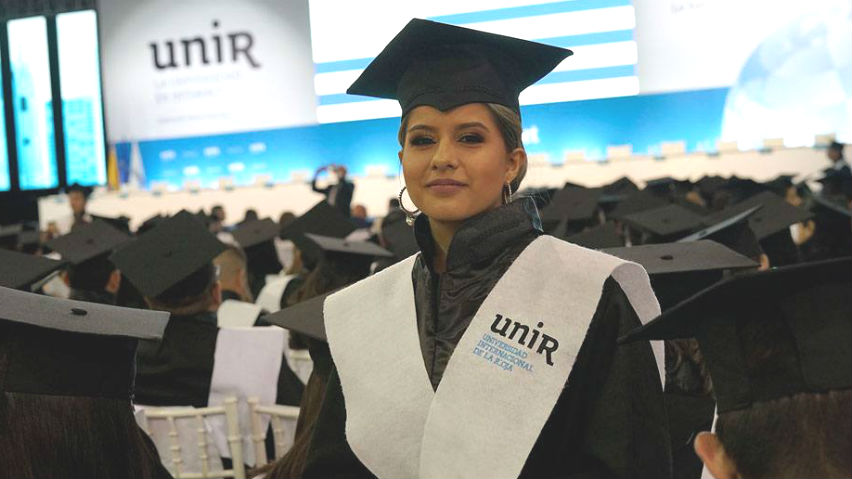